Cardi B said she makes money moves. Well, I am in a season where I am making God moves.

I did a FB live on this topic, but I really wanted to write a blog about it as well. When I talk about God moves, I am really talking about obedience. When God tells you to move, you have to move.

This is a new season for me where I am believing God to do things I have never believed for before. I moved to St. Louis at the end of May. It was a quick move. January of this year I had no idea I would actually be moving. It wasn’t even in my heart to move, but God had other plans. When God tells you to do something, you have to do it no matter how it feels or what it looks like.

We tend to assume that because God told us to do something it will be without challenges. I knew God had called me back home and I was excited because I felt like doors were going to open and things would be different. That was not quite the case. Doors are definitely opening and God is definitely shifting and moving things around, but it is not the way I expected. I have actually come into a greater awareness of who I am and what God has for me. In Dallas, I knew but I really didn’t know to what extent God was calling me.

Sometimes God has to move us into a quiet place so that the voices around us can be silenced and His voice can be magnified. I felt like I have been in a valley and on each side of me are the mountains I feel I need to climb to get to where I am supposed to be. The frustrating part for me is seeing where I can be and feeling like I am not there yet.

When God moves you to a place, your obedience to go is one thing, but you have to go deeper and ask God why. He doesn’t do anything just to be doing it. What is it that God has been trying to get out of you? What is it that He has asked you to do or start? What is it that He is trying to show you but you refuse to surrender to? There is another level of surrender that needs to happen in your life as you move into what God has called you to. There must be a surrender of your will for His. Things may not look the way you expected them to and doors may not have opened how you wanted them to, but believe me when I say God is moving on your behalf. Ask him for the purpose of this season. Don’t leave this season empty handed. There are things God wants to show you and give you, and if you are willing to listen, you will obtain an understanding that will bring so much clarity to both your now and your next. 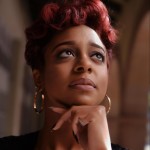